So here it begins; the 2016 Freedom Ride. The TH Freedom Crew met-up with the other 25-odd internationals, who they will be spending the next ten-days on tour with, at the Jenin Cinema Guest House.

They’re a healthy mix of Germans, Swiss, Australians, Portuguese, Ukranians, and of course Brits and Palestinians. There’s also a troupe of Indian actors who’ll be accompanying them.

So trying to remember everyone’s name would be a challenge, but fortunately there’s a game for that. One hour later and everyone had just about managed remember them, but more importantly the bonding had begun. The Freedom Bus Riders will spend the next ten-days together living in simple and sometimes difficult conditions.

The group continued with the warm-ups at the Freedom Theatre itself to get into the spirit of what was to come.

“It was The first time the bus group had been together.  We did exercises and played theatre games to orientate ourselves and get to know each other – trust is the key to a successful tour.

“During the Freedom Ride we’ll be using Playback Theatre where participants see their stories, thoughts and feelings acted out by actors. ‘This is what happened, this is what I felt, this is what I did. It matters; others understand; this is not just me.’

“The format makes dialogue and empathy easier and more likely.

“We’re being treated to warm-up sessions by the Freedom Theatre and an Indian acting group Jananatia Manch from Delhi, who gave a very powerful performance of their play about domestic violence.

The group followed up with a sobering tour around the Jenin Refugee Camp where the Freedom Theatre has been based since its inception.

Mary Brodin sent back this report: 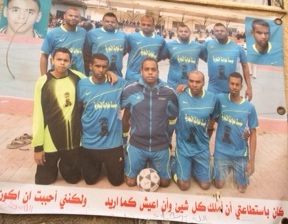 “On the top right of the picture is Ezz, aged 18, shot dead in his family home, falsely accused of making firework explosions.

“The second victim,  Yousef aged 17 (top left) was shot by a rooftop sniper as he returned home one night after buying hummus for breaking the fast in Ramadam.

“The refugee camp is regularly invaded by the IOF with up to 400 soldiers who circle the camp in two rings and then lay siege to the target home.”

Tomorrow the Bus heads to the Jordan Valley for a few days, then the refugee camps of Bethlehem and finally the South Hebron Hills.

Our chair, Sybil Cock, local residents Mary Brodin and Ruby Hirsch, actor Doug Holton and cartoonist Tim Sanders, arrived in Palestine this weekend and will be joining The Freedom Theatre’s Freedom Ride across the West Bank from tomorrow.

The last few days they took a look around Jerusalem before travelling up to Jenin to stay with an old friend.

The man in the picture (right) had his family home in Jerusalem Old City stolen by settlers a few years back while his family were attending a wedding. This man only managed to save part of the extensive family home because he didn’t go to the wedding. He now lives in the tiny white building attached to the lovely old building.

A little later the Israeli settler family who had moved in to the ground floor attacked his two sons. The sons were arrested and spent two years in prison. In 3 weeks time he is going to court for the 3rd time to stop his total eviction.

The top floor remains empty, protected by surveillance cameras and a neighbouring security force. The plaques inside the front door show that 2 New York families have funded this terrible policy of Palestinian evictions from the Old City of Jerusalem, alongside the Israeli flag decorating the entrance of what was once a Palestinian home.

The man in the picture (right) is a volunteer manager at the Al Bustan community Centre in Silwan, just outside Jerusalem old city.  Silwan has long been a target for settlers and many houses, including this centre are threatened with demolition.

His son has been arrested 21 times in 9 years, the first time he was 9 years old. He talked about ‘existing to resist’.  He feels that the rest of the world has abandoned Palestine, but gets on with organising children’s activities, such as dancing, drawing, painting and music.

He asked for us to pressure our decision makers to fix the bad decisions of the past, like Balfour.  He lives in fear, has no power, but he is strong because we have the right to be here.  The trees are older than the Occupation.

The Londoners are just some of the British citizens taking part in the week-long Jenin Freedom Ride organised by the Jenin Freedom Theatre to celebrate the 10th anniversary of the Theatre. The performers will use ‘play back theatre’ to transform the villagers’ daily experiences under Israeli occupation into improvised theatre.

On Easter Saturday participants in the Ride will perform in Manger Square, Bethlehem and on Easter Sunday they will meet residents in Aida Refugee Camp, Bethlehem and hear from leading Palestinian activist Omar Barghouti.

The arts are becoming more centre stage and more contended in the Israeli/ Palestinian conflict with the international boycott movement hitting Israeli artists and audiences hard and growing international support for Palestinian arts and culture as non-violent tools for change.